I love the “lotto” trade.

Kenny, what are lottos?

“Lotto” trades use expiring options contracts that makes them the equivalent of a lottery ticket – they’re usually all or nothing.

When are they in play?

Generally, on Fridays. Because that’s when weekly options expire, so you won’t be paying anything extra for time value.

But Kenny, it’s hard for those options to get into the money on Fridays!

You’re right, it is. But with lotto options, we’re not looking for options to go into the money. We trade these options, opening and closing the position before the end of the day on Friday.

For example, take a look at this chart below. It’s a chart of the individual option contract for the Invesco QQQ Trust (QQQ) $324 call that expired on Friday. 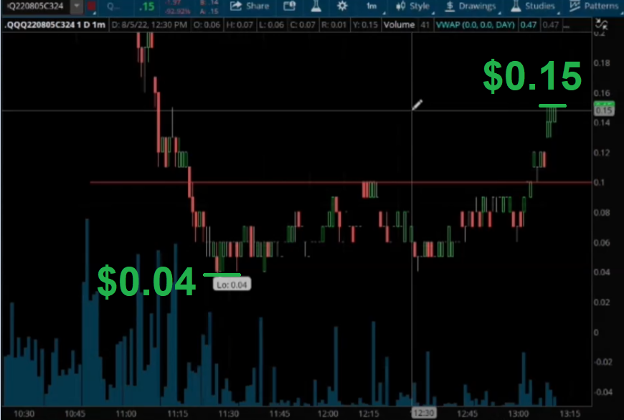 These options bottomed out at $0.04 per contract.

I bought some at $0.05 per contract. And a few moments later, they broke the middle of the kardashian bottom pattern and were trading for $0.15 per contract.

But here’s the thing about lotto option trades…

Don’t come into the day thinking about lottos first.

Lottos are fun trades that are paid for by sticking to what works first – 1-minute multiday VWAP reversals on stocks that have reported earnings.

If you don’t understand what that means, then you’ve got to join my Warlock’s World.

Because in Warlock’s World we teach you how to navigate the rigged casino that is this market.

Come learn to trade VWAP with me and then we’ll laugh and giggle on Friday’s when we trade lotto options for a goof.

That’s all for now VWAPians!