Tuesday was, once again, all about one name.

And that name was Chegg (CHGG).

This is a stock that was HAMMERED after reporting earnings after the market closed on Monday.

But where others may see a dwindling portfolio from a bad investment in a crappy company, I saw opportunity.

These are the kinds of trades I LIVE for.

I first brought CHGG to my Warlock’s World members’ attention while I was on air with Voz during Money Morning LIVE. 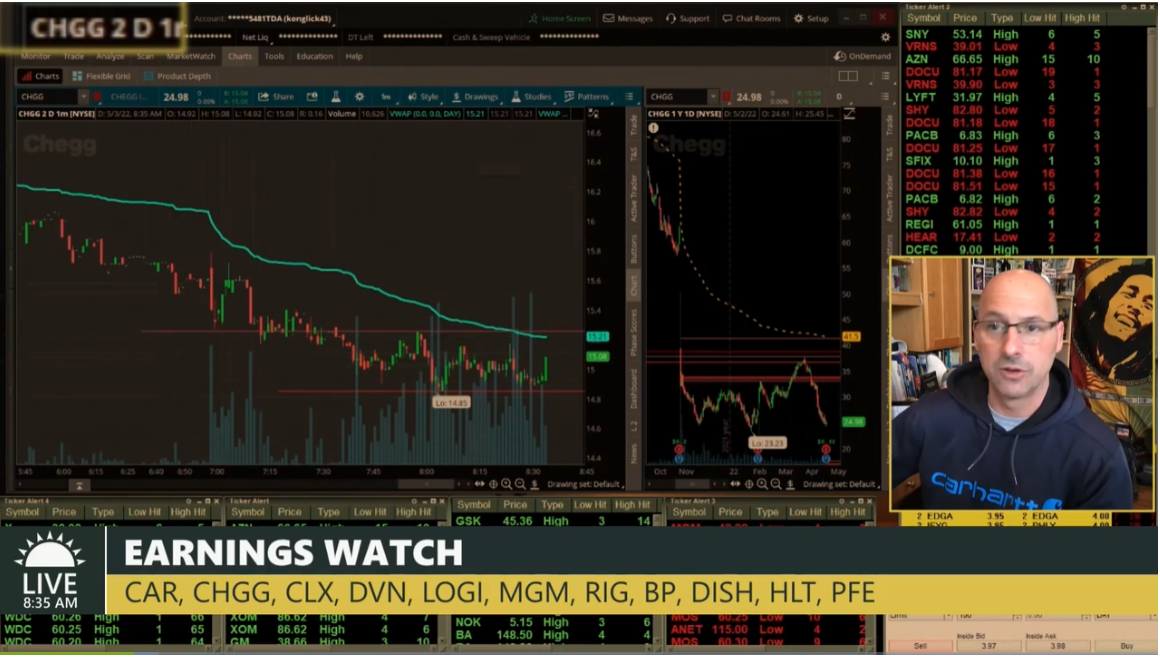 CHGG was crushed after reporting earnings on Tuesday

CHGG was down over 30% after reporting earnings for their chocolate egg business, or whatever it is the company actually does.

After plunging down the $15 level in premarket, that’s when I saw an opportunity to do the unthinkable – trade CHGG to the upside.

But Kenny, their numbers were terrible! The stock was down too much!

Here’s the great thing about trading 1-minute multiday VWAP reversals in Warlock’s World – we don’t care about any of that.

It almost always comes down to two questions – questions that I trade by:

CHEGG had, in fact, reported earnings. That’s why it was gapped down so much!

And you know how I LOVE to trade earnings gaps.

When I let my Warlock’s World members know to be hip to CHGG, it had not yet broken VWAP to the upside.

But what it had done was hold significant price levels.

So my downside risk was DEFINED.

And a short while later, CHGG did EXACTLY what I wanted it to do…

CHGG broke VWAP to the upside shortly before the market opened.

I had let the Warlock’s World community know to get in around the $15 level, with a stop at the premarket low of $14.85. 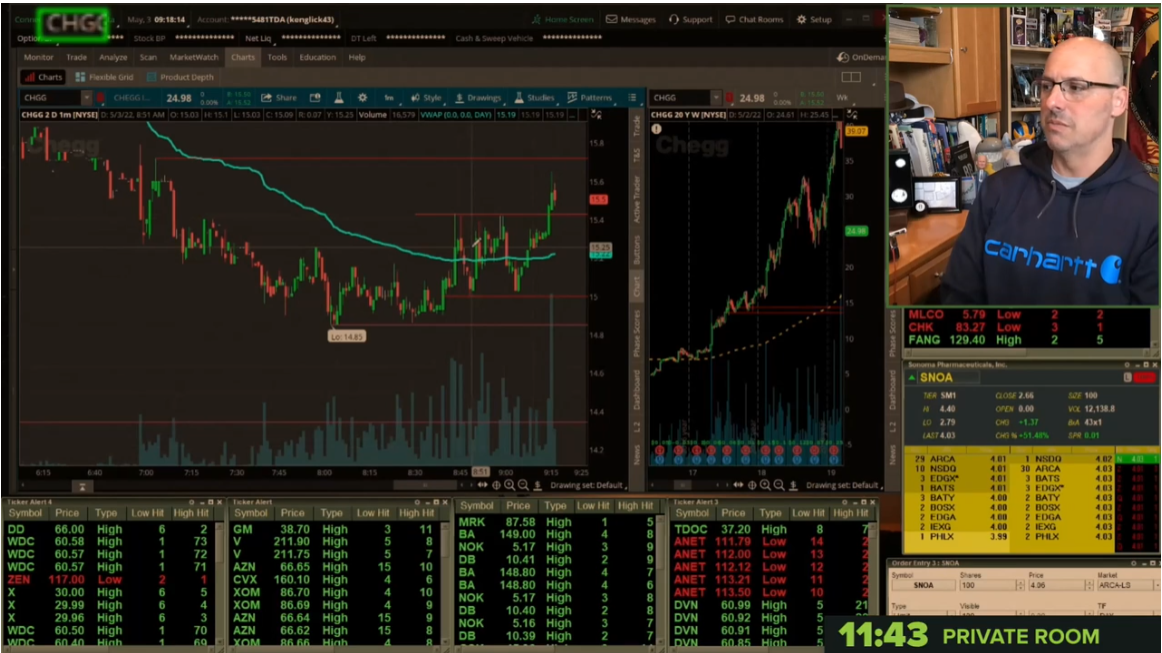 CHGG broke VWAP then broke out

The stock ended up forming perhaps my favorite pattern that I teach totrade – the “Kardashian Bottom.”

Once CHGG broke higher after breaking the middle of the Kardashian Bottom range, the stock never looked back.

In fact it just kept chugging along. 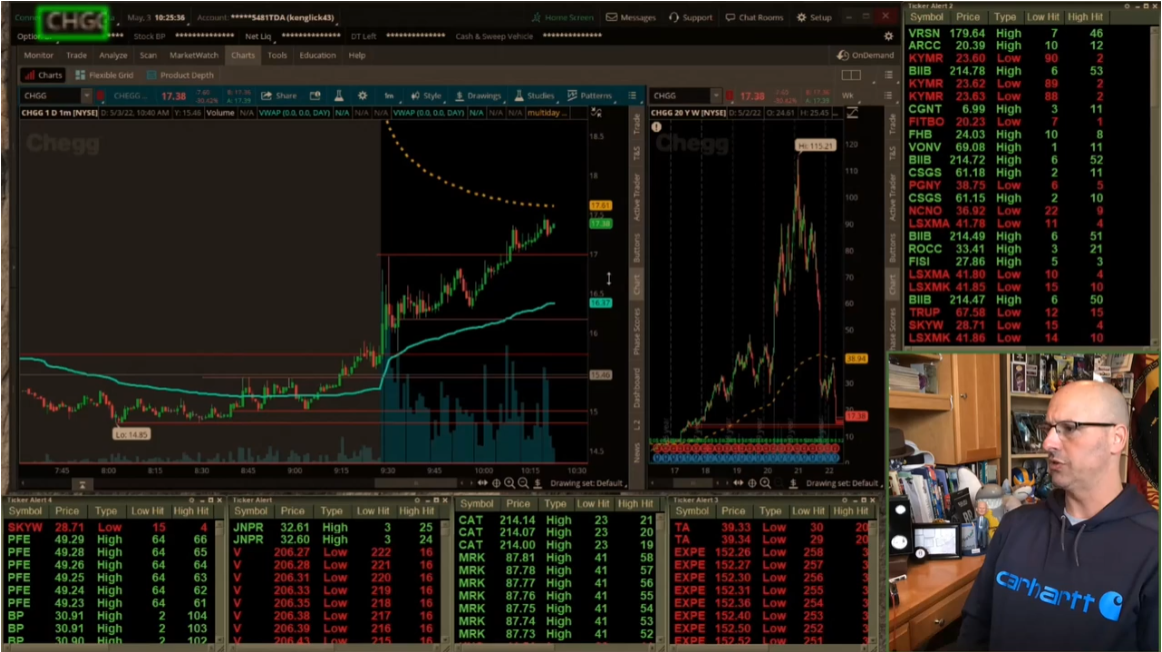 Chegg chugged like a choo choo train all the way to the multiday VWAP, completing my signature trade – the 1-minute multiday VWAP reversal.

That’s a trade that even my small account players can participate in.

Of course it’s possible to have scaled into this position with some bigger size – I generally tend to trade 1,000 share lots.

The thing about this trade was that CHGG never really gave a reason to punch out of the trade.

It never broke back below VWAP.

Heck, it didn’t even test VWAP.

Or, if you’re like me and came in with some size, it could have resulted in a nearly $3,200 gain!

That pays for an entire annual subscription to Warlock’s World.

That potential $3,200 in profit would have nearly paid for your entire LIFETIME Warlock’s World subscription.

And this isn’t even counting the additional earnings prep sessions that are exclusive to my lifetime members.

Now, I’ve recently caused a bit of a kerfuffle by offering a HUGE discount to join my service…

But you may not have been in the room during that session on Money Morning LIVE.

That’s why I wanted to continue to offer the single greatest deal to join me FOREVER.

RIGHT NOW you can save $750 off my LIFETIME Warlock’s World.

I’ve given our VIP Concierge team special instruction to talk to you about payment options – we want to remove every barrier to get in NOW.

I find trades like CHGG for my Warlock’s World members nearly EVERY DAY.

Imagine just how fast you could pay off your subscription – even with the discount!

Plus Warlock’s World has a 30-Day Money Back Guarantee.

That means that joining Warlock’s World today – for $750 off – is RISK FREE.

So call 877-568-8270 and mention promo code BLANCHE now to receive $750 off a lifetime Warlock’s World subscription, and you could be trading with me as soon as today.

This is the deal of a LIFETIME (see what I did there?), so you better pick up that phone.

Save your trading career and start trading with me today.