But revenge is a dish best served cold.

And there’s NO ONE colder than the 8-Baller.

I’m not going to break down every awesome trade I’ve had since then (VTNR, how ya doin’?), but I did want to share a quick breakdown from yesterday’s Daily Decode that could have made you BANK.

In fact, broke down the price action in futures in real time.

This was a trade where you could have risked 4 to make 24.

You wanna find out how to apply the extra knowledge and insight that I provide the Warlock’s World community?

Check out this chart of the ES Futures that I was breaking down in Warlock’s World. 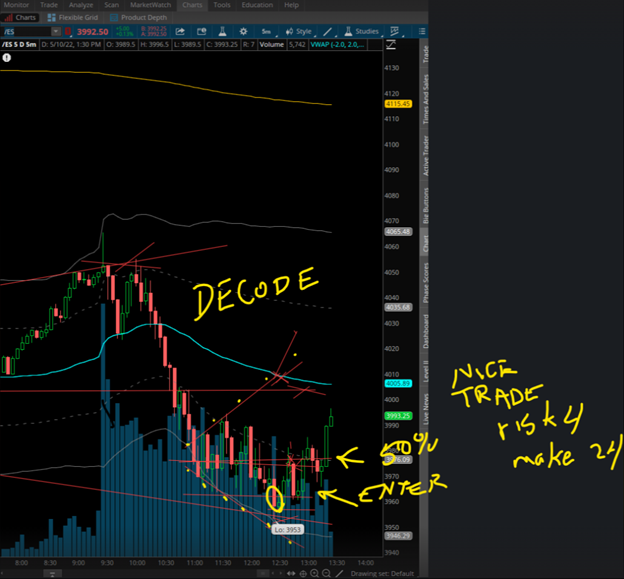 Admire my handiwork.
That pattern that is outlined with the dotted yellow lines is a fractal.

Also called a widening pattern, it is drawn after noticing consecutive candles moving higher and lower while in range.

First I draw a line down the middle of the range, generally on a price level of significance using the tops and bottoms of candles.

These trend lines usually form an isosceles triangle, which I have dubbed a fractal.

As you can see on the chart above, I drew an X on the chart, because based on price action, that was where I could see futures rising to.

S&P Futures rising toward the top of my fractal
So I was right on the PRICE LEVEL, but a little off on the WHEN. Hey I’ll take it.

Trading is anticipation. Anticipation is trading.

The great thing about fractals is that you can extend the trendlines out even further as the day progresses, keeping them intact, but lengthening them. 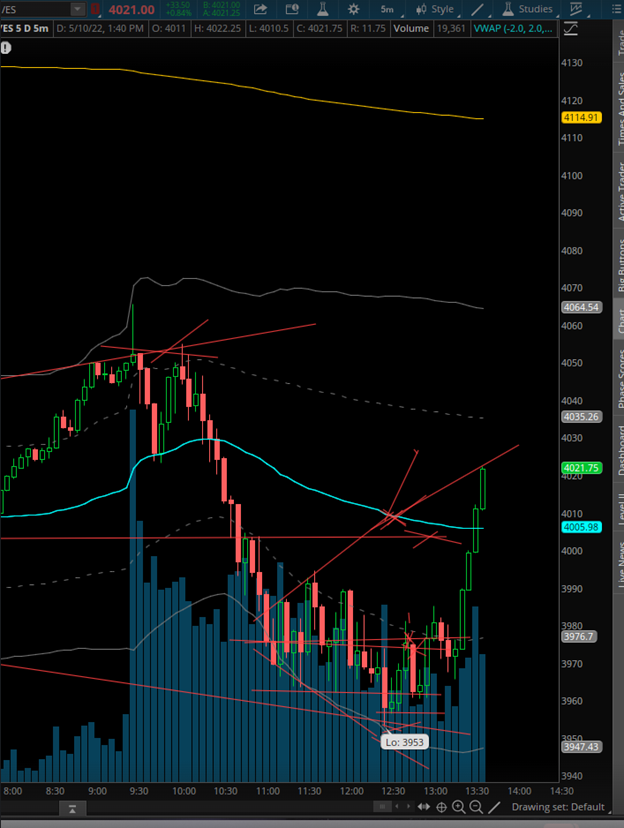 S&P 500 futures rising to the top of the fractal
As you can see ES futures rose even higher.

Let’s quickly break that down.

Futures had been beat up, but were consolidating in a range below VWAP.

Price action was moving both higher and lower, allowing me to choose a center point and draw trendlines to the upside and downside.

These trendlines allowed me to anticipate where price action could lead to, which coincidentally was to VWAP to the upside.

Now, you don’t HAVE to be sticking with futures for this.

I’m a time continuity trader, and frequently use different time periods on my charts to gain an edge.

One of my favorite charts is the daily chart.

But for this specific trade, ES Futures moved 24 points from the middle of the fractal.

For the members of Warlock’s World who might not be able to trade ES Futures contracts, the same moves are correlated in the State Street S&P 500 ETF Trust (SPY).

You see, THIS is why you need more 8-Baller.

Tricks of the trade. Fractals. Insights to the markets that NOBODY has connection to.

And that’s just the tip of the iceberg.

Iceberg, GET IT? Because there’s NO ONE colder than the 8-Baller.

One response to “How fractals lead to profit”