Yesterday was another one of those days during my Warlock’s World live stream.

Another day where you could have paid for your entire lifetime subscription.

But we’ll get to that in a moment.

First, I wanted to let everyone know that unfortunately, I’ll be out today.

HOWEVER, luckily for you, my brother from another mother 8-Baller is filling in!

If you aren’t already familiar with the Fractal Assassin – it’s time to get familiar.

Warlock’s World members and VWAPians everywhere are incredibly lucky that 8-Baller is here to step into my shoes.

To be honest, he should probably have his own service!

The guy is that damn good.

If you’re wondering why he goes by the Fractal Assassin, then you have to tune in and learn how his fractal based charting approach generates profitable trading opportunities.

With such a strong trader like 8-Baller stepping in to lead the VWAP army in the day’s trading, maybe I should take more days off!

There’s NO WAY I could stay away from my Warlock’s World for too long!

Now about that trade…

Yesterday I was on the hunt for a good trade in the premarket – as usual.

Of course, I dropped my Warlock’s Watchlist to my members before anyone else.

My watchlist from yesterday (editor’s note: time in PST)

There was a lot going on with a very active premarket after the latest Consumer Price Index numbers were released.

All that whipsaw activity to me just looked like an opportunity.

The CPI data release caused a BIG move in the futures market. I’m sure 8-Baller was more than happy. He loves trading futures.

But me? Your friendly neighborhood Warlock?

I stuck with the trades that have only worked about 97% so far this year.

As you can see above, I put Roblox (RBLX) on my watchlist shortly after 8 a.m. ET.

But this trade – it was so sick – you have to SEE IT to believe it! 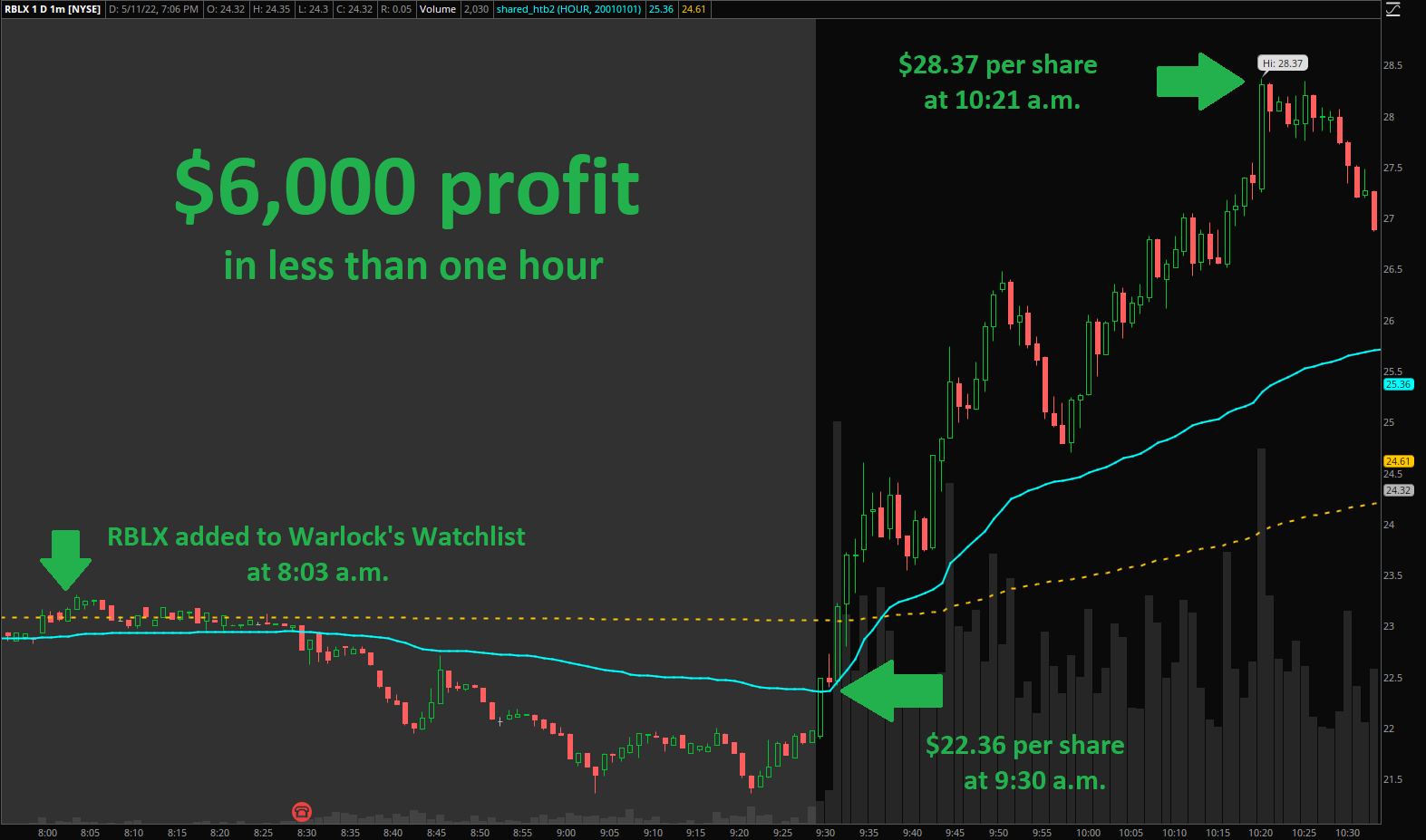 RBLX screamed higher out of the open yesterday

That’s enough to pay for your entire lifetime Warlock’s World subscription and walk with a thousand bucks in your pocket!

Even a trade of 100 shares could have returned over $600 in the same time frame!

So even my small account players could have made their trading day!

Before you scoff at making only $600 in one trade, think of it this way…

That’s a decent sized income to sit and laugh and trade with me all day.

And think about it…

We’re doing this in a bear market.

Everyone else is worried about their portfolios bleeding out, but in Warlock’s World we are LIQUID AND LOVING IT.

Click here for FULL DETAILS about all the perks of joining Warlock’s World.

Who knows, that one click could change your entire trading career.