Did you know that I hate swing trading?

Seriously. Ask any of my Warlock’s World members.

Swing trading is the gateway drug of the bag holder.

A swing trade is a day trade gone wrong.

A bad day trade becomes a swing trade which inevitably leads to becoming an investor.

The monthly chart was telling me its about to get into a new zone, and if it gets into this zone, the next level of resistance is $27.30. 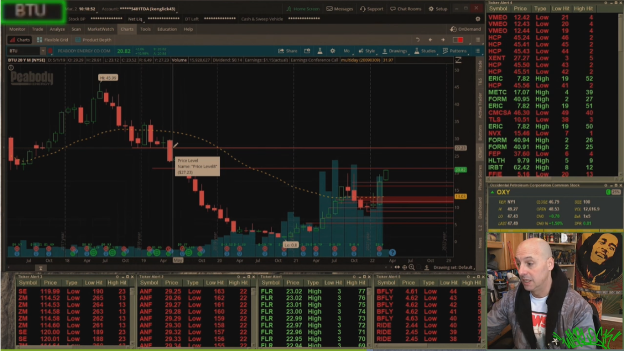 I hate doing anything other than VWAP trading where I’m the one in control. That’s why I hate swing trading.

Some bad news could come out overnight and the stock could DUMP.

Fast forward to TODAY and the BTU trade is a microcosm of why I don’t need to own stocks and why I don’t swing trade.

What do you see on this chart?

If you said 1-minute multiday VWAP reversal on a stock that reported earnings, YOU WIN!

But look at the PRICE, Blanche!

BTU came out of premarket trading and touched off the multiday VWAP at $20.10.

The SWING TRADER would have been shaking in their boots, HOPING that the BTU price recovered to the upside.

Instead, the Warlock’s World VWAPian bought the VWAP break at $20.50 and rode the stock up to $22!

But here’s the thing.

BTU offered an opportunity to short in the premarket from $21.50 to that multiday level of $20.10.

The SWING TRADER wouldn’t have had the opportunity to go short in the premarket.

The SWING TRADER would have been hoping and praying for the eventual reversal.

The nimble VWAPian had the opportunity to get paid TWICE.

And this is EXACTLY the kind of trades I walk my Warlock’s World community through EVERY DAY.

Like I said, swing trading is the gateway drug of the bag holder.

True VWAPians are liquid, loving it, and telling their friends about Warlock’s World.