If you were with me in my Warlock’s World yesterday, you could tell I was frustrated.

That’s not my speed.

But sometimes there’s going to be days like this, where we have to be patient.

Not every day is going to be a blockbuster day.

You didn’t see me trying to force my Warlock’s World community into losing trades just so we could have content.

Just because things were slower than my normal break-neck pace, that doesn’t mean that 8-Baller and I didn’t deliver on finding winning VWAP trading opportunities.

I stuck to what WORKS. 1-minute multiday VWAP reversals on stocks that have reported earnings.

I still have never seen a market where this strategy has worked SO WELL.

For example, on Tuesday, I let my Warlock’s World community that I was watching Ammo Inc (POWW) for a potential earnings reversal. POWW is one of those stocks that usually has such low volume that it trades by appointment.

The stock was meandering around a pretty tight range, so I took some time to answer some of my Warlock’s World members’ questions about everything from JAWS trivia to order entry.

It wasn’t until after that I had gone off the air for the day that POWW had made the trade all worth it. POWW slowly grinded its way to the upside.

It might have taken most of the day, but POWW finally broke above the multiday VWAP – blue line to orange line – and followed through to the upside.

That may not seem like much at first glance, but in Warlock’s World, my community and I are making trades like this EVERY DAY.

On Monday, if you PAID ATTENTION to the Warlock’s World chat, I informed the community of significant news about Virgin Galactic (SPCE) before anyone else knew about it.

Oh, but 8Ball how did you know about this?

And whattya think happened next? 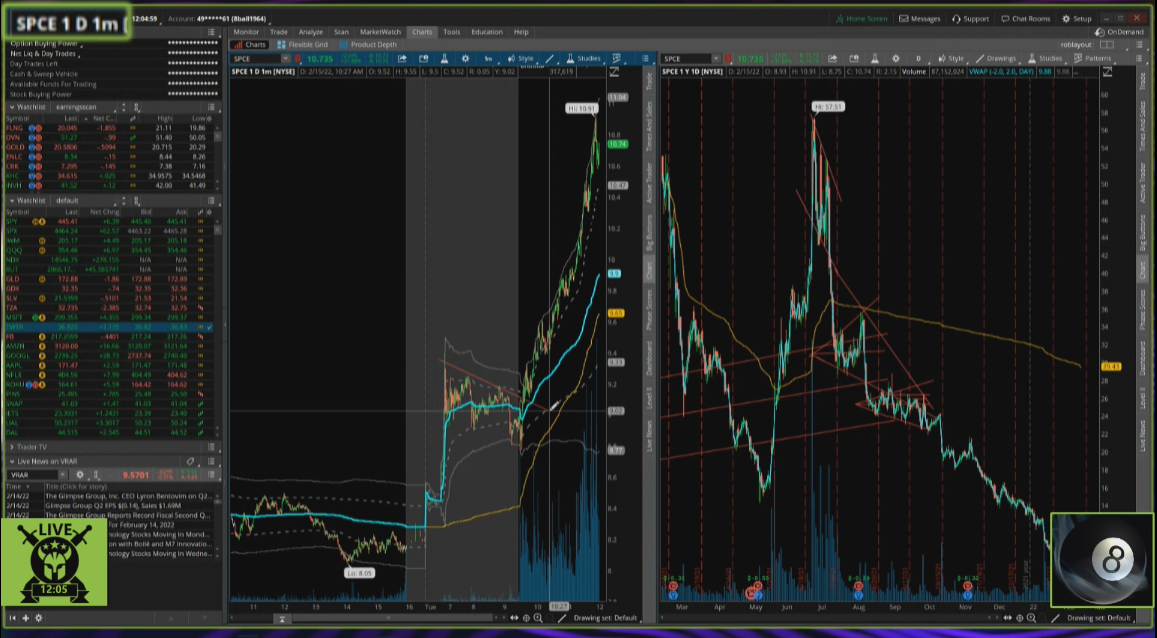 When I brought this SPCE news to the attention of Warlock’s World, the stock was trading at $8.35.

You have to have the fortitude and the bank to step in and realize.

Hesitation KILLS in this business. Ya gotta put a trade on. It’s your JOB to buy stock.

One who does not execute will not be long for this business.

Thankfully, more than a few members of the Warlock’s World community were PAYING ATTENTION.

I knew when I asked who had no fear and put a trade on in SPCE and I got THIS response. 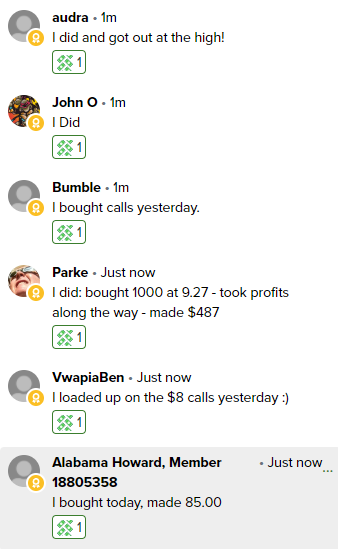 What I bring is tricks of the trade.

What I give is the opportunity to really WIN.

I’m looking forward to the next time the entire Warlock’s World community can join me when I say:

Earlier I said if you made the one trade that I did on POWW that it could have brought you a $360 profit on 1,000 shares…

Well 8-Ball DELIVERED another winning trade opportunity which could have paid for your entire Warlock’s World subscription!

Then YOU could hang with 8-Ball and the Warlock FOREVER.

This is why I beckoned 8-Ball off the beach in Miami to help lead the community in my Warlock’s World.

Usually I say if you don’t know me, GET TO KNOW ME.

But now it might have to be if you don’t know US, GET TO KNOW US!

Join Warlock’s World NOW, so you NEVER miss out on this kind of opportunity EVER again.