I hear all the time:

Kenny, you have so many rules to trading VWAP, I’m getting lost and confused.

Well, guess what Blanche? I found a chart in my Warlock’s World on Monday that represented almost EVERYTHING you need to know about trading.

So buckle up, Buttercup. 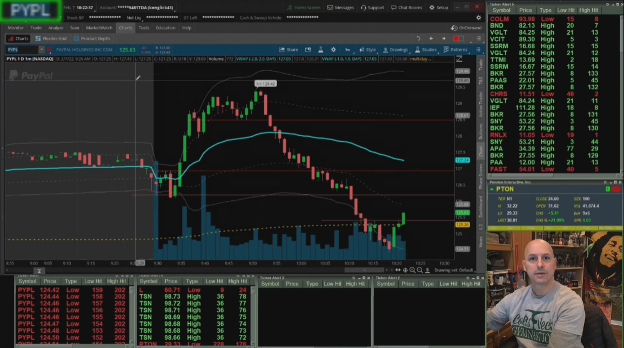 Almost EVERYTHING you need to know in ONE CHART

This is a chart of PayPal (PYPL) from Monday morning.

At a quick glance, you might be saying But Kenny, I don’t see why this chart is so important.

I already took the time in Warlock’s World to explain the WHY and HOW VWAPians can take advantage.

What do we see on this PYPL chart? In the most BASIC terms, stock went up over blue line, stock went down under blue line. There’s a LOT to unpack is just that statement alone.

In trading, don’t expect to be on the same side of a trade all day.

Things move fast in this market. As VWAPians, we have to be nimble.

It would be great if you get in on a stock as it breaks VWAP right after the market opens and just keeps powering higher all day.

But since VWAP can act like a magnet, this isn’t always the case.

When a stock that has higher volume than normal, or is “in play”, breaks VWAP, usually the price is going to trend in that direction.

PYPL broke VWAP to the upside shortly after the open. The little move it pulled before the open, where it dove below VWAP is called the “Fo Sho Bro”.

PYPL briefly broke VWAP to the upside. That’s the fakeout.

Then the stock set a new low under VWAP. That’s the shakeout.

The breakout happens when PYPL breaks VWAP to the upside at $127 and change, then rises all the way to the high of the day of $129.42.

As VWAPians, if we’re buying stock and it goes up, we sell into the move.

I never exit my position at one price.

Selling into the move and raising our stops locks in a profitable trade and leaves a little juice in the tank for a further move higher.

And see what happens next with this PYPL chart?

From the high of the day, which is marked on the chart, PYPL double topped then started to move lower.

As savvy VWAP traders, when the price starts to move to the downside, sure we get stopped out, but because we had our stops in place, it’s a disciplined, winning VWAP trade.

So what happens next? PYPL breaks VWAP to the downside.

When a stock breaks VWAP that was just higher, that’s a scary moment for the longs and they’re going to react by selling stock, which will push prices lower.

But look at this move! LOOK AT IT.

And LOOK at where the PYPL share price goes to. Aaaaaalll the way to the multiday VWAP.

All of this proves that there’s only ONE way to trade this market.

100% liquid. Not caring about what these companies do or what they’re financials are.

You may be thinking “I wish I would have shorted it, damn, now what.”

It went down to the multiday. The hard work is OVER. The algorithms that run the market operate on VWAP.

VWAP is telling you which side of the market to be on.

The moment that you ignore VWAP is the moment your trading career is over.

You should never expect to be on the same side of the same trade all day.

This is the chart that’s needed to remind you how to trade.

One chart. One name. One belief. VWAP. It’s the only thing you need.

And THIS is the kind of education that I bring EVERY DAY in Warlock’s World.

This isn’t some PICK service. I’m not telling you WHAT to buy and leaving you to fend for yourselves.

Warlock’s World is all about TEACHING my community HOW to trade VWAP.

My goal is to have YOU eventually bring ME VWAP trade ideas!

I’ll get you there Yes, even you, guy in the back.

But you HAVE to be a Warlock’s World member to take full advantage of any VWAPian’s greatest resource – ME.

If I can tell you ALL of this from ONE CHART, just imagine the possibilities of joining my Warlock’s World for LIFE.

Hopefully I’ll see you in my world soon!