For the last 18 months, I’ve been like a dive bar. CASH ONLY – and I don’t like taking trash home at the closing bell.

The bear market is here. I CALLED IT.

(I also called the Cathie Wood top, by the way…)

As I’ve been telling you for MONTHS, when the market starts to turn to the downside (like it is because I CALLED IT), we’ll be LIQUID and LOVING IT and LAUGHING at all those SUCKERS buying stocks.

The best part? We don’t even need to bother trying to find the bottom.

Let other people lose their money trying to find the bottom.

This is the kind of big Warlock energy that I’m bringing EVERY DAY to Money Morning LIVE at 8:30 a.m. ET RIGHT HERE.

Then, I shake, rattle, and roll my way down the red carpet that leads into my Warlock’s World, where I LIVE trade VWAP from 9:15 to 11 a.m. ET every day.

But Tuesday was all about ME and my brother 8-Baller.

You may know the enigmatic 8-Baller from his appearances on Money Morning LIVE.

Or you may be familiar with the Fractal Assassin as the host of The Daily Decode in the Warlock’s World, where he breaks down my trades with his unique ear-to-the-street perspective.

You see, 8-Baller and I go way, way back. He’s my right-hand man, but he could be the head of his own dojo in his own right.

The powerful one-two combination of Warlock and 8-Baller is the kind of value you can ONLY get in Warlock’s World.

And to show ya exactly what that would mean for you, let me tell you a story about one stock we “double dipped” on Tuesday…

Ya see, 8-Baller and I are cut from the same cloth. And that cloth is NICE, let me tell ya, Blanche.

But this story starts with the Warlock.

Tuesday morning, I let my Warlock’s World members know that I had my eye on this stock, Vinco Ventures (BBIG) – specifically, watching for a BBIG break above $4.87 and the 1-minute VWAP (blue line).

If you didn’t know, 87 is something of a magic number for 8-Baller. So that should have told you something from the get-go.

But look! LOOK WHAT HAPPENED, BLANCHE. 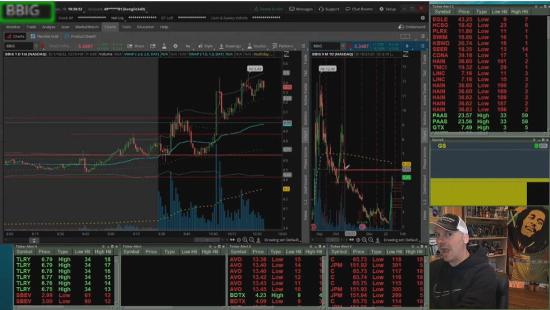 Not only did BBIG show the significance of half numbers and whole numbers, but it showed the Fo Sho Bro pattern, and the Warlock’s World crowd favorite, the “Kardashian Bottom”.

By the time 8-Baller came into Warlock’s World for the Daily Decode, BBIG had drifted to a lower range.

While Mr. “I’m not your broker” was diagnosing my trade from Tuesday morning, he drew his own unique fractal range on the BBIG chart that highlighted potential directions the BBIG share price could go in afternoon action.

That’s part of the insane value that 8-Baller brings to the table. While all I need is VWAP and PRICE, 8-Baller is incredible at determining a stock’s trading range with his unique fractal charting techniques.

You HAVE to watch the man in action in Warlock’s World to fully appreciate (and take advantage of) his uncanny ability to determine trading ranges that are scarily accurate.

8-Baller drew a fractal trading range for BBIG on Jan. 18.

See that green candle with the arrow that says “target” pointing to it?

That’s the price that BBIG hit after 8-Baller drew his red lines. The BBIG share price went almost exactly to this number of $5.25.

At the time 8-Baller was drawing his fractals, BBIG was trading in the $4.80 range! 8-Baller’s uncanny ability could have provided a nearly $0.50 per share gain after I had already taken it for a ride!

But this ain’t the only reason that 8-Baller’s value is unparalleled.

As a self-proclaimed “time continuity trader,” 8-Baller not only trades VWAP like a champ, but takes a long-term view of the market. And on Tuesday, he reminded me of just how masterful he is.

8-Baller humbly bragging about his brains.

Way, WAY back on Dec. 30, 2021, roughly three weeks ago, 8-Baller mentioned that a little birdie on the Street saw an imminent sharp drop for the market.

What happened next? The market (as I predicted), took a turn for the downside and bled for the better part of the last three weeks.

8-Baller told me that he closed those SPY puts yesterday, just before expiration, for just over $20 per contract each.

These are options, so each contract represents 100 shares. So the original contracts he bought for $419 and sold for more than $2,000 EACH.

And THAT’S the kind of value that 8-Baller brings to Warlock’s World EVERY DAY.

We BOTH tried to tell ya about BBIG, Blanche. So remember:

That’s all for now, VWAPians! Be sure to join ME (and 8-Baller) in the BIG ROOM at 1 p.m. RIGHT HERE, so we can let everyone who isn’t a part of Warlock’s World know EXACTLY what they’re missing out on!