Everything I say is very, very important.

I’ve been trading my whole life. I might know more about this than ANYBODY.

All the tricks and subtleties go a long way now that we have VWAP telling us what to do.

And as this rigged market starts to crumble, we’ll be laughing while everyone else fights over SCRAPS.

I’ve been saying this for MONTHS!

While the Bull Market From Hell™ was ripping higher, I was stalking VWAP trades and biding my time, waiting to unleash my inner bear.

As VWAPians, we’re ready for this market to slide.

That’s why becoming a full-fledged member of my Warlock’s World is SO important right now.

Sure, you COULD catch me on Money Morning LIVE every day starting at 8:30 a.m. ET RIGHT HERE.

But to reap the full benefits of knowing ME, you HAVE to be in my Warlock’s World.

And like I tried to tell you yesterday, I don’t come alone, Blanche.

My buddy, my brother, the Bobby “8-Ball” Eight, aka the 8-Baller brings so much extra value to Warlock’s World, it’s RIDICULOUS.

Of all the numerous 8-Baller quotes, my favorite might be the simplest.

You see, while I’m flirting with Mark on Money Morning LIVE, or commanding the legions of VWAPians in my Warlock’s World, the Fractal Assassin is GOING. TO. WORK.

Because when I got the mic, 8-Baller pops into the Warlock’s World chat and drops nugget after freaking nugget.

After Garrett Baldwin had talked up silver on Money Morning LIVE, 8-Baller dropped in my Warlock’s World chat that he was watching Newmont (NEM) for a breakout on the daily chart.

NEM is a gold mining company, so clearly 8-Baller had been paying attention to what Garrett had mentioned in the big room.

8-Baller said that he was watching NEM for a breakout at 9:51 a.m. ET. By the time 8-Baller’s Daily Decode rolled around in Warlock’s World at noon ET, this is what happened. 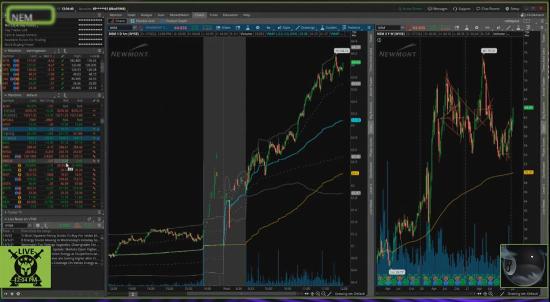 But Bobby Eight wasn’t having any of that. He grabbed the NEM $65-strike calls at the beginning of the day for $0.05 apiece. By the time the Daily Decode rolled around at noon ET, those contracts were trading for $0.55 EACH.

In other words, one trade could have paid for an entire LIFETIME Warlock’s World subscription.

You could imagine my reaction if you didn’t “pay attention” and take this trade… It was something like this: So the next time I hear someone say “Well I didn’t hear you mention it” about ANY of the trading opportunities in Warlock’s World, I’m going to respond with my favorite 8-Baller saying.

Speaking of paying attention and mentioning things, did you see what I said about potentially paying for an entire LIFETIME Warlock’s World subscription in ONE TRADE?

Since earnings season is upon us, I’ve cranked up the number of EXCLUSIVE LIFETIME Warlock’s World earnings sessions.

During these exclusive sessions for LIFETIME members, I guide my most loyal VWAPians through chart setups and significant price levels to watch out for stocks that are reporting earnings.

The next of these sessions is TODAY at 3:30 p.m. ET in the LIFETIME Warlock’s World room.

If you’re not already a LIFETIME member, there’s still time to join ALL the EXCLUSIVE earnings sessions – including TODAY’S.