And you know what that means.

In fact, if you used the $10 call on our Blackberry (BB) trade yesterday, in lieu of buying the stock outright, it went from .43 to over $1. 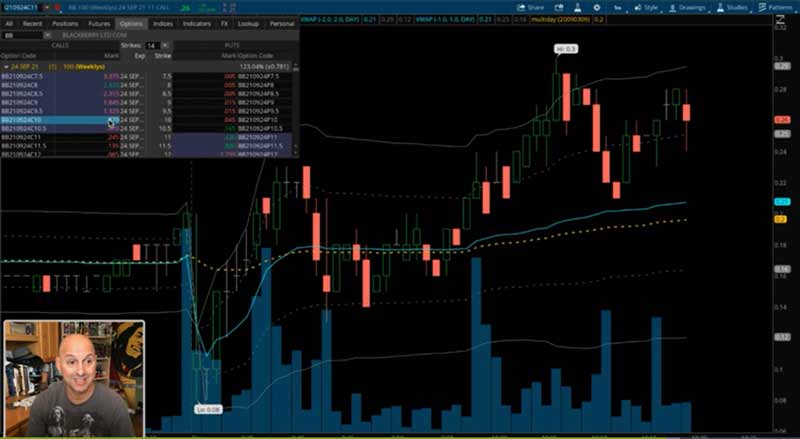 But regardless of whether you used the options or just bought BB shares outright (like me), it was all about sticking to… the plan.

You should always know where you are getting out if it works as well as, if it doesn’t.

Because let’s face it… sometimes our trades aren’t going to work.

But that’s okay, as long as you define the trade ahead of time.

Today I’m going to break it all down so you can see where we found the trade, how we knew when to get in, and how we managed it.

As always, catch me LIVE in the Money Morning LIVE room at 9:30 a.m. ET…right here.

You can view my rolling watchlist here, as well as my daily Warlock Watchlist at the top of ThisIsVWAP.com.

IT WAS ALL ABOUT BLACKBERRY

I get this question a lot.

“Why were you watching Blackberry (BB) Kenny?”

“I didn’t see it on your watchlist.” Or my favorite… “I didn’t hear you mention it.”

Well I did mention it, BLANCHE!

Blackberry (BB) was on my watchlist yesterday because it had just reported earnings.

I’m a day trader, I need there to be volume and movement to make money in short time periods.

The absolute best trades I take are on stocks right after they report earnings.

I live off of these trades.

I put gas in my car from these trades. My son goes to college because of earnings plays.

My family eats and vacations on earnings plays.

Brody – my human dog – went on a shopping spree because of the BB trade.

No Joke! Check this fool out…

You get the point… Trading stocks right after they report earnings is my favorite trade.

And we are getting close to peak earnings season as we speak so strap in, it’s going to be fun.

Now that you know why I was looking at BB, let’s dig in.

I mentioned the stock on the Money Morning LIVE show in the premarket.

And again as soon as I went LIVE at the open, when the trade was ready to rock.

If you tuned in, you know I was looking for a buy in BB.

But Kenny, it was gapped up on earnings… don’t you usually like to fade earnings reversals?

Yeah BLANCHE, I DO – except when I don’t.

It’s all about having a plan, and defining your risk.

And yesterday I liked BB as a potential buy.

The word *potential* is important here because… I Only Do What The Market Tells Me.

So if VWAP told me not to buy, I wouldn’t buy.

And guess what? Right off the opening bell, VWAP told me not to buy… so I waited.

BB actually broke below VWAP right off the bat.

Being that my plan was to buy, it wasn’t hard for me because that told me to wait.

But let’s say you played it as an earnings fade.

The trade simply didn’t last, but it did go down enough to take a little off AND I mentioned 10.16 level being critical so stopping out there was pivotal.

That all happened really fast though, so you may need to hone your trading skills.

Lesson: You must be nimble like a ninja to trade the open.

Now the plan I shared with you however, was to buy BB.

It clearly wasn’t a buy on the open as it broke below VWAP.

So I did what any rational trader would do… I waited, Blanche.

I only do what the market tells me to do.

But I didn’t have to wait long.

We got the dip… and then we got the rip… also called The Checkmark of the Lord.

After the initial move down, BB breaks back above VWAP and the opening price of 10.15.

So when The Dip became The Rip… that was the market god calling from above.

“Yo, Kenny… you know that buy you were looking for in BB?”

Sweet, thanks market god… or I should say VWAP, which is the market.

I talk about this all the time… do not exit all of your position at one price.

I will come to your house and slap you in the face.

But seriously… do whatever you want, it’s your trade.

I trade the way I do because it fits me.

I will teach you what I’ve learned and how I trade, but do what works for you.

What works for me is selling into the move.

So I offered out little pieces of my BB position as it moved up.

I simply put my offers out there and as it moves in my direction, I’m getting out little by little.

I’m locking in profits along the way, but also keeping some to take advantage of further moves in my direction. 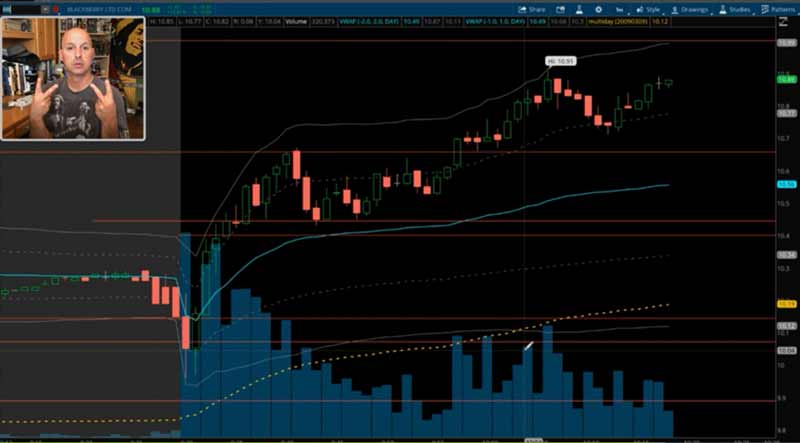 Day’s pay and Go away

But that’s only one part of trade management.

You must also know where you will exit the trade if it turns on you.

For me I like to move my stop up as new levels are hit, getting to break even as soon as possible.

And once the stock gets to the higher end of my targets… in this case the upper 10s, I will move my stop up to VWAP and let it trail.

And I only had my “I don’t care what happens” shares left at that point (That’s the little bit I like to keep, just in case the stock goes to 100).

But if it turns on me, the trade ends back at VWAP.

Always be on the right side of VWAP.

Alright VWAPians, Let’s get to it though.

It’s going to be a fun one as always.