First of all, thank you to everyone who showed up to my special TRADE THE CLOSE session yesterday! 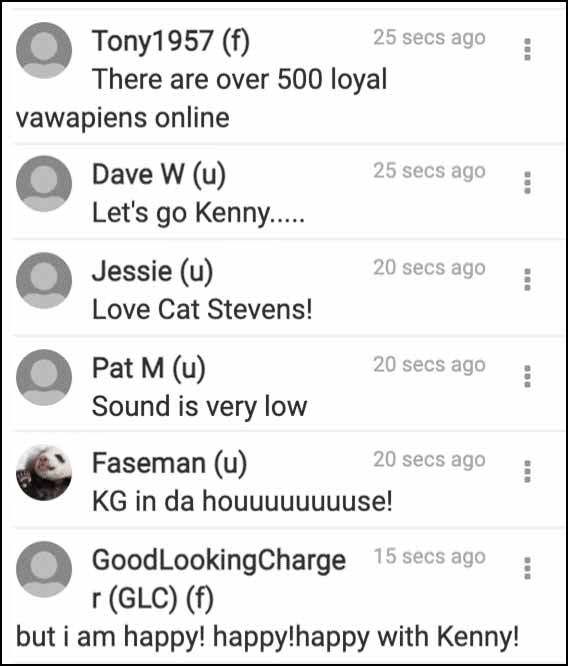 We had fun last night!

My goal is to teach you ALL the nuances of mastering the VWAP day trade, so if you missed Thursday’s 3:30-4:30 p.m. hour, you can catch the full replay right here.

We’ll also do it again in the next couple of weeks, so make sure you keep an eye on your inbox for details and watch me trade LIVE each morning at 8:30 a.m. ET on Money Morning LIVE, followed by a full hour of me at 9:30.

But for those of you who learn better through reading, I’m going to lay out a lot of my points in this space right now.

Because as I’ve said before – what the stock does outside normal trading hours is important for VWAP day traders, because after-hours and pre-market levels usually come back into play after 9:30 a.m. ET.

So last night, many of you watched me not only build my initial Warlock Watchlist, but also plot my charting roadmaps for the next day, based on initial earnings reactions and a few key candles that we’ll go over now.

Everything Andrea says is important!

4 Steps to Stalking Stocks After Hours

In a nutshell, during yesterday afternoon’s special session, you watched me take a few steps to start building my Warlock Watchist for the next day.

We first took a look at some of the earnings coming out around the 4 p.m. close.

I often use Earnings Whisper’s calendar, but you can also find a general earnings calendar on the ThisIsVWAP.com home page.

We identified several companies about to report their quarterly figures, including GoPro (GPRO), Zillow (Z), Sunrun (RUN), and Beyond Meat (BYND), and added them to our list.

When those companies began reporting at the closing bell, we then moved to Step 2.

I then started looking for the knee-jerk earnings reactions by scanning the headlines.

Specifically, I’m looking for the initial media rumblings – whether the company’s per-share earnings, revenue, or guidance missed or beat expectations – to see which direction the stocks would go.

Words and phrases like “better than expected,” “disappointing,” “upbeat“… these are what I’m hunting in the post-close headlines.

When we found a stock on the move after earnings – like GPRO here – we moved on to the next step. 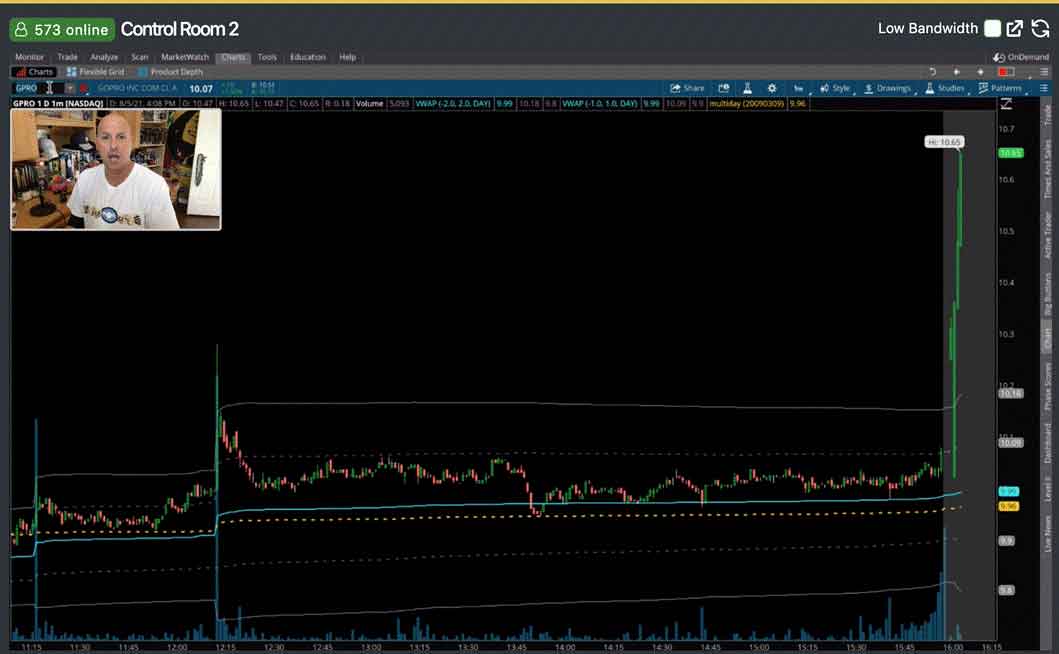 GPRO broke out after-hours on earnings

Here’s where the REAL fun begins, ladies and gents!

After watching some of the early action shake out, I begin marking some potentially relevant candles and levels that could come into play the next day.

The next morning, breaks of these levels could translate into long or short signals for me, or even profit and stop targets, because I like to have an exit strategy before I even put on a trade.

The levels I mark usually include: 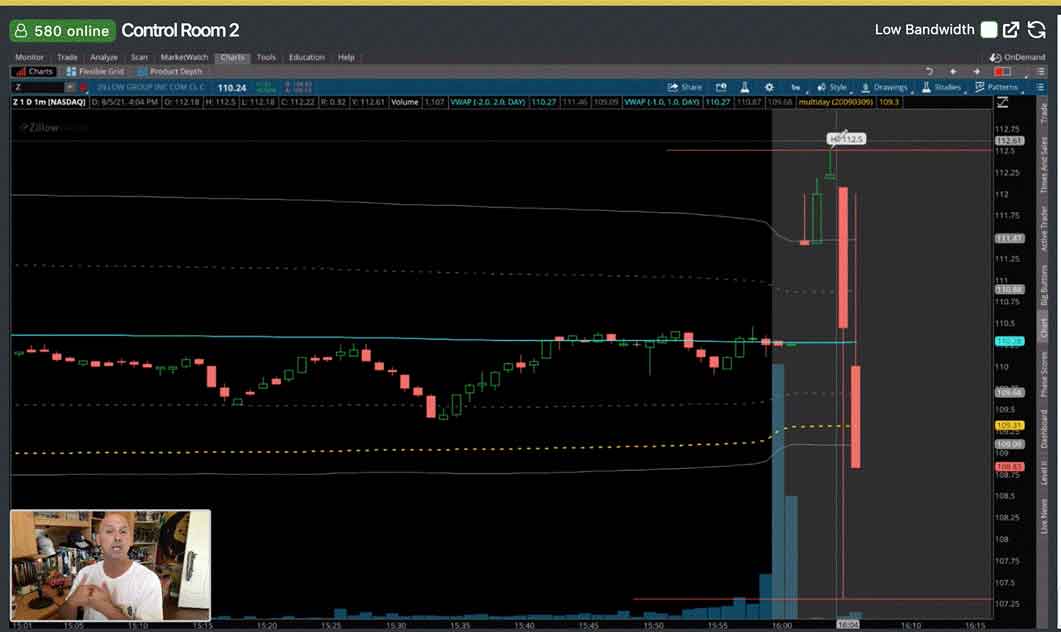 And then I like to circle back a bit later for the final step of the evening:

For instance, you can see on the RUN chart below that I marked the $54.60 level, because it kept making noise as an after-hours pivot point.

And since the entire market is run on algorithms, that’s not a coincidence. 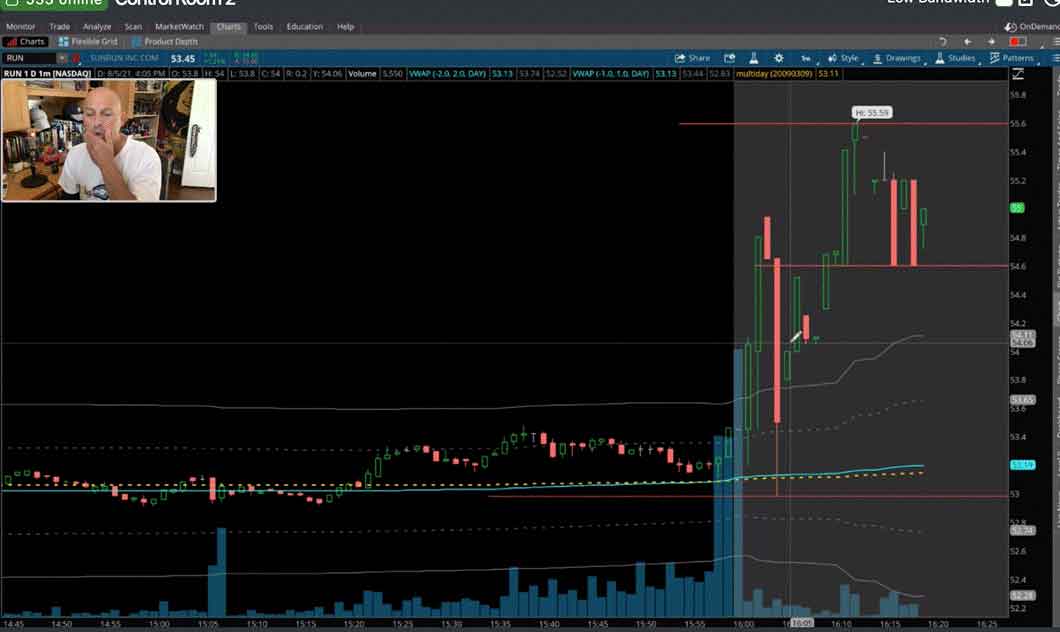 Once I get the after-hours roadmap plotted, I can then take a breather before doing it all again in pre-market hours for stocks moving on early earnings reports.

Now, obviously I don’t end up actually trading EVERY stock I watch in the after-hours – during earnings season, that would be too much to handle for a day trader who needs to stay nimble.

But being proactive in delineating levels I might want to trade around – and, of course, always obeying the VWAP – gives me an advantage the next day when I’m hunting those earnings reversals.

Because when you’re a day trader like me, who needs to act quickly to be on the right side of the 1-minute VWAP, anything you can do to save time and get you ready for the action – well, it’s usually worth doing.

Stocks I Could Stalk Early Next Week

Don’t be surprised to find names like Barrick Gold (GOLD), bluebird (BLUE), DISH Network (DISH), and Planet Fitness (PLNT) on my list around earnings on Monday.

Fan favorite Coinbase (COIN) is expected to report on Tuesday, as is Poshmark (POSH).

Thursday we could hear quarterly reports from Walt Disney (DIS), Canadian Solar (CSIQ), Airbnb (ABNB), DoorDash (DASH), and Wish (WISH), while Friday is relatively light with not many notables reporting.

And, of course, the stocks on my Go-To Watchlist – like Peabody Energy (BTU) – could remain on the Warlock radar.

Only time will tell which ones make enough noise to capture my attention next week, so make sure you’re watching me at 8:30 a.m. ET on Money Morning LIVE, and that you stick around for my LIVE hour of trading at 9:30!

We have some really exciting things planned for next week…

4 responses to “4 Steps to Stalking Stocks After the Close”